I’ve just been re-reading one of my favorite thought-provoking – and sometimes irritating – books, The Black Swan.  One of Taleb’s characteristically sharp remarks jumped out at me.  “I disagree,” he says, “with the followers of Marx and those of Adam Smith: the reason free markets work is because they allow people to be lucky, thanks to aggressive trial and error, not by giving rewards or incentives for skill.”

Now, there is so much packed into this thought that I hardly know where to begin.  Did Adam Smith really claim that the wealth of nations was built on incentives?  This is a vulgar, modern, New York-centric view of free enterprise, whose true pillars are free trade, expansion of the market through increased reach and personal wealth, specialization, consumer sovereignty, the absence of large, intrusive and parasitical government, an independent and powerful framework of law, depth of autonomous social institutions, and huge variety of small and large companies.

But let that pass.

What Taleb is dead right about – and what nearly all supporters of free enterprise miss at their peril – is the absolutely cardinal role of trial and error in making the economy swing.

Another way of saying it is that luck is at the heart of capitalism and of any well-functioning economy.   Luck is also at the core of any really vibrant society or individual life.

Nearly all experiments fail.  This is true in the laboratory, in politics, in society – remember communes? – in our personal lives, in the arts and literature, and, above all, in business.  Life and learning are chock-full of dead ends.

Perhaps the best illustration is nature and the evolution of life.  For every species that has endured, there were myriads of cruel extinctions.  For every planet that has worked in terms of sustaining intelligent life, there are millions that have not.

No inventor found his or her fame and fortune at the first attempt – it usually takes hundreds or thousands of experiments to make a breakthrough.  And for every scientist or inventor you have heard of, there were thousands who toiled all their lives to come up with a great product or insight – and never reached the Promised Land.

In business, we are used to the idea that most new ventures fail, but it is far worse – or perhaps better – than that.  Even the new businesses that survive are usually inconsequential; they neither change the world in any noticeable way, nor make their founders rich.  To make a dent in the universe is incredibly hard.  It is good to ignore this plain fact.  If we realized the odds against achieving anything considerable, we would all stay in bed.

Sadly, majestically, the 80/20 principle – soon to be rebranded the 95/5 or 99/1 principle – rules over all.  To arrive at the sunlit uplands of life, the universe, and everything, requires a stupendous amount of experimentation and failure; and in the end, for any kind of big leap forward, a quite astronomical degree of good luck.

But hold on, help is at hand.

Luck is a strange, paradoxical concept.

If you think about it hard enough, the distinction between luck and non-luck is vanishingly small.  Why?  Because it is possible to become systematically lucky.  This is almost a skill bordering on genius, but it is available to anyone.

The lucky people in life, society, and business are not the cleverest, nor the best connected, nor the most hard-working and persistent.  The most successful are the luckiest.  Yet, the luckiest are the experimenters – the folks who pull the handle of chance most creatively and most often.

The most successful are those who go on lots of adventures – mental, physical, and spiritual.  We can see this at the level of society, of business, and of individuals.

How Cities and Localities Can Create Adventure Zones

Trial and error takes many forms, but its single most potent incarnation is a new business enterprise.  Every such venture creates, at least for a time, employment, new opportunities, and learning experiences for individuals and teams.  A new company trials new consumer or business-to-business products and services, and sometimes new technologies or applications of technology; and it proves or disproves the existence and value of a new market.  Every new business provides lessons for subsequent ventures.

Clearly, however, the greatest benefit comes from having successful ventures, and, even more important, developing a whole ecosystem around them.  Once established, the ecosystem itself creates success, as ventures nestle within a benign, ever-expanding home.

There is something thrillingly local about such ecosystems.  Innovation is easier and strongest when there are several related networks in a particular narrow zone, than when there are isolated firms dotted here and there.  This is how large leaps are made.  In the industrial history of America it was steel in Pittsburgh, cars in Detroit, then, for example, banking in New York, medical equipment in Boston, and so on.  The half-rural enclave of Santa Clara County, better known as Silicon Valley, packs the world’s heartland of electronics innovation into a very small region.  It is the model for any other successful adventure zone, anywhere in the world.

In Silicon Valley success is local, physical, personal and contagious.  How come?  The answer probably comes best from British economist Alfred Marshall, writing way back in 1890:

Great are the advantages which people following the same skilled trade get from one near neighbourhood to one another.  The mysteries of the trade become no mysteries at all, but are as it were in the air … if one man starts a new idea, it is taken up by others and combined with suggestions of their own; and thus it becomes the source of further new ideas.

The key element in the spread, amplification and adaptation of good new ideas is face-to-face discussion, just as it was a century ago.  Knowledge is “in the air”.  This doesn’t mean cyberspace; it means very local air.  Anyone who has worked in Silicon Valley knows this.  As the Spanish sociologist Manuel Castells says:

Silicon Valley kept churning out new firms, and practicing cross-fertilization and knowledge diffusion by job-hopping and spin-offs.  Late-evening conversations at the Walker’s Wagon Wheel Bar and Grill in Mountain View did more for the diffusion of technological innovation than most seminars in Stanford.

What regions and cities need is a local equivalent of Silicon Valley – there are several reasonably successful imitators, but there need to be many more.  Whether such zones are high-tech or no-tech, or both, they should be the first priority of any nation’s economic policy, because new ventures alone can provide an increase in sustainable employment and high future profits and cash flow – these will not come from big corporations or government or quasi-public entities, all of which are increasingly parasitical on the wealth-creating entrepreneurial sector.

But how to create such hubs of adventure?  It is relatively easy to make zones bigger and stronger once they exist, but seeding them is hard.  What is needed is a kind of concentration of the tribe of entrepreneurs in any one country or smaller area – we need to shepherd entrepreneurs from similar or diverse industries into a small zone, so that they are forced to rub shoulders and learn from each other.

How can this concentration be achieved?

Cities or districts such as counties should have the power to offer everything that will attract new and young ventures into the zone – science parks, excellent office and facility space that is rent-free for a few years, subsidized equity and loans, low taxes and no red tape, together with a really attractive social scene – cafes and restaurants, gyms, bars, and quirky shops should already be in situ by whatever means necessary.   Ideally these enclaves should have no taxes on corporate income, reduced flat-rate income taxes for all employees of small companies, and no capital gains tax either for investors or entrepreneurs and their staff.  Of course, there would be a loss of tax revenues to the national exchequers, but these would be more than made up by the prosperity that, before long, would ooze out of the entrepreneurial hotspots into the economy as a whole.  Unemployment would fall as job-seekers were attracted to the new zones, not just by jobs but also by the buzz pervading the place.  To further stimulate the influx of talent, the zones should have the freedom to grant work visas – valid only within their areas – to qualified entrepreneurs and investors from around the world.

Luck congregates in certain places, so to be lucky, we must go to where luck is abundant – and create more such places.   In my next post – on June 7 – I will turn to how individuals can take their lives to a new level by deliberately cultivating lucky adventures. 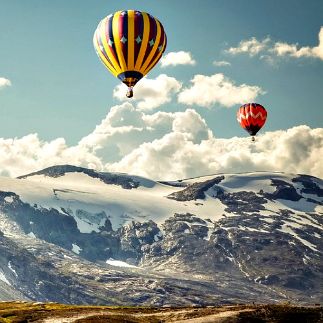