events can often obey one theory or another, and what actually happens can depend largely upon which theory we choose to believe.
WHAT IS YOUR THEORY OF WHY YOU WILL SUCCEED?

“Unlike phenomena in physics,” writes Professor Leonard Mlodinow, “events can often obey one theory or another, and what actually happens can depend largely upon which theory we choose to believe.”  This profound observation is my theme today.

For example, psychologists have proved that labelling children as gifted is a self-fulfilling prophecy.  In one experiment described by Mlodinow in his book Subliminal, schoolkids were given an IQ test and their teachers were told which children were unusually gifted – the children were not told the results. In actual fact, however, the children identified as specially gifted had only average scores.

The kids were given another IQ test eight months later, and the results were truly shocking.   Of those identified as brilliant, four out of five children had an increase in IQ of at least ten points.  One fifth of the group actually scored thirty or more points higher.  Yet the teachers had been instructed not to say anything particularly encouraging to the “brilliant” children and to treat their classes impartially.  What appeared to have happened was that the teachers unconsciously influenced the identified kids to believe in their potential.

“Evolution designed the human brain,” say Mlodinow, “not to accurately understand itself but to help us survive … if our natural view of the world is skewed, it is skewed for a reason.”  This is why optimism is so functional – people who are optimistic can often make that a self-fulfilling prophecy.  By believing we can control our environment, we find ways to do precisely that.  As Henry Ford once said, whether we believe we can achieve something or not, we are right.  There are obvious limits – a belief that we can walk on water or repel the waves is not functional.  “In order for your inflated self-image to serve you well,” Mlodinow writes, “it must be inflated to just the right degree and no further.”

But if we truly believe that we will achieve a certain goal – which is objectively within our power, even if only just – we are quite likely to do so.  Mlodinow reports that recent brain-imaging studies “show that when assessing emotionally relevant data, our brains automatically include our wants and dreams and desires.”  The unconscious mind then operates unseen and unsuspected to try to bring these to pass.  But perhaps the most vital effect of the unconscious on how we live is nurturing a positive self-image.  “Our unconscious is at its best when it helps us create a positive and fond sense of self, a feeling of power and control in a world full of powers far greater than the merely human… Those feeling good about themselves are more cooperative … and more likely to find a constructive solution to their conflicts.  They are also better problem solvers, more motivated to succeed, and more likely to persist in the face of a challenge.”

Let’s construct some implications of the research on the “new unconscious”:

When we visit a new town or country, we are likely to find what we expect to find.  When we try a new product, we are more disposed to like it if we have already been told how great it is.

Within limits, we can construct our own reality.  There is no reality “out there” which is not filtered through our perceptions and prejudices.

We are more likely to succeed if we have already succeeded.  It is often the case that highly ambitious and successful people had some early experience of success which then spurred them on to greater success … and so on.  It is therefore vitally important to take what I call “baby steps” to achieve success in some field – any field will do.  One of the wonderful things about life is that there a zillion different routes to success.  So if we have any talent or interest in any sphere – in music, in writing, in carpentry, in model-building, in repairing bicycles or cars, or in any field of knowledge at all – and can attain even modest success, that increases our confidence and the range of achievement that we think we can attain.

We are more likely to succeed if we think well of ourselves.  Therefore never ever tell your children or yourself that they or you are stupid.  Do not give them or yourself a hard time. There are always mitigating circumstances.  Actions may be stupid, but people are inherently creative and intelligent.  One of the best things to praise in yourself and people around you is the ability to learn from your mistakes.

This is an example of “re-framing”.  One of things I learned when I was a management consultant in Bain & Company was the importance of re-framing any event in a positive way.  So the client had just dropped a huge bundle of dollars in one of its businesses?  Well, the good aspect was that it demonstrated that the company should get out of any market where it didn’t have a strong competitive advantage, and focus on the few ones where it had a really strong hand.

The chief executive had just made a foolish move?  Well, she should “own” that mistake and draw out the positive implications for all her managers.

A study had shown that a large customer was unprofitable?  Well then, all customers should have their profitability examined.  For those that were very profitable, the corollary was to expand the business you did with them in any way possible, and to find other similar customers.  And for the loss-making customers – find a way of making them profitable by raising their prices or cutting the cost to serve them.  And if that then made the customers go to a rival firm – good.  Let them make a loss on the customers rather than make it ourselves.  As Bill Bain was fond of saying, “the best way to start making money is to stop losing money.”

A company is more likely to be successful if it has a strong belief – a strong theory backing it up – that the firm will succeed.  This is why consultants with a strong and valid model of success – such as the early “Boston Box” and its stress on the importance of star businesses and competitive advantage in all the businesses in which the firm invests – can be so beneficial.  If you do not have a theory of why your firm will succeed, it is much less likely that it will.  If you believe the theory and act consistently in accordance with it, success is more likely – whatever the theory (though some theories are better than others).

In our personal lives, ask yourself which is likely to make for a good relationship with your romantic partner – a belief that they are attractive, talented, and good company, or one that their personality is badly flawed?  If we have any form of contempt or believe our partner to be inferior in any important attribute, that belief will communicate itself to him or her even if we say absolutely nothing.  So give your better half the benefit of the doubt, and think about their most positive attributes, and praise them.

If you are dating, or deciding whether to start a serious relationship, ask yourself if you consider your partner to be your equal or better in all ways that are vitally important to you.  If you truly cannot say yes to that, and overlook other defects, do not start or continue the relationship.

If you are the boss, take a positive view of the good attributes of your people and their potential.  If you cannot do that, it is better to let the person go.

Yet the most indispensable attitude we take is that to ourselves.  If we should be kind to our children, our spouse, and our employees – not primarily because it is a duty, but because it will lead to the results we want and make a better world for everyone – how much more vital it is to be kind to ourselves and give ourselves the benefit of the doubt, and believe that we can achieve great things.  If we truly believe that, we will. 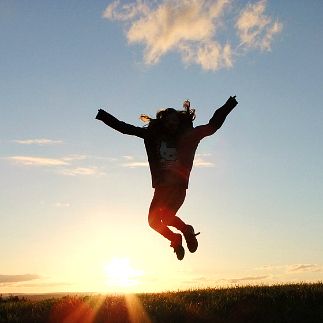