America does need to be made great again.
WANTED: A NEW WAY TO MAKE AMERICA GREAT AGAIN

America does need to be made great again.  But it cannot be done by warmed-up nationalism.  It has to be done through a new political ideal.  This is not an opinion.  It is written into the warp and woof of American history and American identity.

The US is unique in many ways, but most importantly in this: it was settled by dissidents pursuing an idea.  The settlers were seventeenth- and eighteenth-century Protestants.  Their idea was a homogeneous Puritan community of independent citizens – God-fearing, hard-working, self-improving.  They came armed with Anglo-Protestant – largely British – culture, values, and know-how, sharing in large part the intellectual assumptions of the European Enlightenment – a peaceful community, grounded in scholarship and progress, friendly to the arts, sciences, and commerce, and advancing human dignity, freedom, and happiness.  To be sure, these were ideals not always lived up to, but they were sincerely held, and they were political or ideological, not national, in character.

American identify was forged by two great political upheavals: the American Revolution and the Civil War.  Up to the 1750s, settlers and their descendants identified principally with the state settlements – Massachusetts, New York, Pennsylvania, or Virginia – and beyond that with “British North America” and the lands from which they came.  It was only with the events leading up to the Revolution and Declaration of Independence that American national identity began to emerge, heavily associated with a political creed proclaiming the equality and individuality of free Americans.

Still, state loyalties remained salient right up to the Civil War. It was only after this cataclysm, from the 1860s to the 1950s, that American national identity became paramount for most Americans.  Reflecting its origins in two traumatic conflicts, it was a very ‘political’ form of nationalism, pulsating with passion for ‘the American way’ – a set of beliefs that came to be second nature to most free Americans.

What were these beliefs?  They were grounded in the radical political ideas of seventeenth- and eighteenth-century Europe, and in Puritanism.  In 1944, political scientist Gunnar Mydral defined ‘the American creed’: “the essential dignity of all men, and of certain inalienable rights to freedom, justice, and a fair opportunity.”

In the past three decades, huge numbers of Mexican and other Hispanic immigrants have settled in the US.  Unlike earlier immigrants, they have retained close links to their home base, often remaining Spanish speaking and having dual nationality or citizenship.  Some observers believe that America is evolving towards a bi-cultural, bi-lingual society.

In addition, the advance of individualism has been accompanied by a turning towards inward and self-defined identities – such as feminist, gay, and lesbian – resulting in a partial shift from engagement with the nation to one with smaller and more homogenous groupings.  The decline in communal identity, and trust in political leaders, has also weakened national allegiance.  Finally, as noted by Samuel Huntingdon, “elements of America’s intellectual, political, and business elites increasingly downgraded their commitment to the nation and gave privilege to trans-national and sub-national claims on their loyalties.”

The events of 9/11 led to a dramatic revival of American nationalism, but this appears to have been an exceptional and temporary spike in a long, downward trend.  Events in Iraq, Syria and elsewhere have not restored a sense of American pride or surefootedness.  Nor has the increasing polarization between Democratic and Republican parties, each backed since 2000 by almost exactly one-half of the electorate, helped a sense of a united America.  Meanwhile, the economic collapse in the “Rust Belt” and in many once-great American cities, now reduced to near-third-world levels of squalor and poverty, has not helped either.  The continued economic and technological triumphs of Silicon Valley and most of California should be a source of national pride, but just as often sparks resentment as the country becomes more economically unequal.  As more and more citizens have become dependent on increased levels of welfare, and as even the middle classes have become less economically secure, even the centuries-old ideal of American individualism has appeared less relevant or widespread.

Yet we can be sure that an attempt to revive American nationalism will not succeed if it is divisive.  From this perspective, the problem with extremist Muslim terrorism is not that it is too much of a threat, but that it is not enough of one, not by a long chalk.  When Hitler won an election in Germany in 1933, and then seized power and began to persecute the Jews, they were numerous and rich enough to be painted, albeit mendaciously, as a threat to the nation.  The same cannot be said for Muslim extremists inside or outside America today.

If a new idea is to unite and inspire the American nation, it needs to be truly popular with the great majority of Americans, which in turn requires that it needs to incorporate other sources of identity, such as Hispanic, black, feminist, gay, and, indeed, Muslim.  Most of all, however, America needs to rediscover a political ideal consistent with its origins and history.

And it is an ideal that is required, not just an idea.  It has to stress all that is best in America’s heritage and success.  No contender in the 2016 Presidential election articulated such a vision.  In 2020 the candidate who does so most effectively will win; and if nobody does so, the whole of America and the world will lose.

It’s time to begin thinking about what the new political ideal should incorporate.  For starters, we could do worse than highlight three perennial themes which ring out loud and clear in the best of US history – individualism, personal responsibility, and compassionate egalitarianism.  America needs a new Roosevelt, Kennedy, King, or Reagan to blend these ideals into a contemporary program which can attract the admiration and devotion of the great majority of Americans.  For the sake of the free world, America can and must be made great again, but this can only happen with a new, cohesive vision, based on old American virtues. 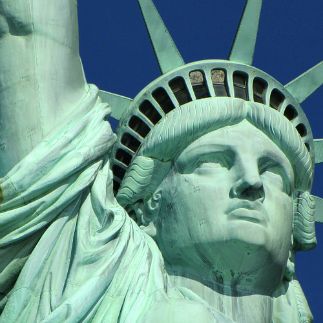