One of the best science fiction books ever
THE BEST SCIENCE FICTION EVER?

Today I’d like to introduce you, if you haven’t read it, to one of the best science fiction books ever, and even if you don’t like SF, you should read this book.  It’s of the same quality as 1984 and Animal Farm, and I’m promoting this book to the top three of ‘political science fiction’ books, along with Orwell’s two classics.  It’s also a great work of fiction, a novel which can be read for pure pleasure.  Most of all I love it because it made me think about our current political situation, in the broadest possible sense.  It has made me take a different perspective on the world today.

I speak of course – as they say when introducing something not totally obscure – of Philip K Dick’s masterpiece, The Man in The High Castle.  Dick was born in Chicago in 1928, died in 1982, and was also responsible for the 1968 dystopia Do Androids Dream of Electric Sheep? – later to become the basis for the movie Blade Runner.  He wrote thirty-five science fiction works, was celebrated by a club of European SF cognoscenti, and almost totally unsuccessful commercially during his lifetime.  He studied Jung, Gnosticism, Eastern religions, philosophy, psychology, and physics.  He had a miserable life, suffering anxiety attacks and depression; he was paranoid, had five failed marriages, became a drug addict, and tried to commit suicide.  Like Vincent Van Gogh, out of bottomless misery he produced work of great beauty and significance.

He believed that the universe was an illusion.  He explored themes of vast significance, yet his novels are about ordinary people and their thoughts, and that is how he paints a geo-political landscape different than the one we know.  The Man in the High Castle, written and set in America circa 1962, uses the experiences and reflections of his unremarkable characters to gradually unfold a horrific world.  Britain, America and the Soviets had been defeated in 1947 by Germany and Japan, largely due to Hitler making the world’s first atomic bomb.  Japan ruled the whole of Asia.  Germany was supreme in Europe, as well as Africa, where the indigenous population had been wiped out by the Nazi final solution.  The Nazis had also turned the Mediterranean Sea into land through nuclear explosions – the fate of the inhabitants is not described.

The novel deals with America, which had been partitioned into three states.  The East is under the Nazis; the West ruled by a relatively benign Japanese regime; and the Rocky Mountain states enjoy a blend of autonomy and anarchy as a buffer zone between the Nazis and the Japanese.  The regime in the South is not explicitly described, but most of its black inhabitants appear to have been eliminated or turned into slaves.

Race, not class, is the predominant social distinction, though both Japanese and Nazi bureaucrats are the new ruling class.  Through the thoughts of the plain and simple people who populate the novel – for example, Robert Childan, a struggling shop-keeper and entrepreneur; Frank Frink, a working-class engineer ; the person with the most spunk, Frink’s estranged wife Juliana, who emerges as one of the book’s heroes; and a series of Japanese administrators who attempt to combine highly ethical religious observances with ruling the inferior white people fairly, and with coexistence with the Nazis, whom they despise both because they are white and because they are unsophisticated thugs – a highly charged drama gradually emerges, worthy of one of the best thrillers of today.

When Frink is unmasked as a Jew, the Nazis plan to ship him off to an extermination camp, and the Japanese officials who rule Western America must decide whether to allow this. Frink is hardly progressive in his views – while he despises the Japanese, he also admires them and he uses the superstitious oracle which directs their actions.

In considering fleeing to the Deep South, Dick tells us, Frank’s “body recoiled.  Ugh.  Not that.  As a white man he would have plenty of place” – the term used by Dick throughout the novel, not explained, but roughly equivalent to ‘social status based on race’ – “in fact, more than he had here in PSA [Western America]” but “he did not want that kind of place [the South].”

Robert Childan, the never-quite-successful trader in fake Americana antiques which are collected by the senior Japanese, is a somewhat-reluctant Nazi sympathizer.  “After all,” we hear him think, the Nazis “had been successful with the Jews and Gypsies and Bible students.  And the Slavs had been rolled back two thousand years’ worth, to their heartland in Asia.  Out of Europe entirely, to everyone’s relief.”

Childan attempts to transition from selling his dubious American antiques to selling genuinely distinctive and beautiful jewellery.  One of his best and most cultured and polite Japanese customers examines a particularly exquisite piece, asking him “American artisans made this piece by hand, correct?  Labour of their personal bodies?”  “Yes,” says Childan, “from initial design to final polish.”  The customer says the product could be mass-manufactured and sold cheaply as costume jewellery and trinkets.

Despite the commercial upside, Childan is appalled – he realizes that his customer views “products of American hands [as] good for nothing but to be models for junky good-luck charms.  This was how the Japanese ruled, not crudely but with subtlety, ingenuity, timeless cunning.  Christ!  We’re barbarians compared to them, Childan realized.”

A Nazi power struggle provides the book’s denouement.  But written skilfully into the novel is yet another fascinating counter-factual history.  The Man in the High Castle of the title has written a book, The Grasshopper Lies Heavy, banned on pain of death by the Nazis, and officially banned too by the Japanese, but circulating quite freely and a bestseller in the Rocky Mountain States where its author lives.

Grasshopper describes a parallel universe in which the Allies defeated the Nazis in the Second World War and Hitler and his cronies are put on trial and executed or imprisoned.  The Americans emerge as the economic powerhouse, and by 1960 free trade, technological innovation, and mass production have given the American working man the highest standard of living in the world.  Juliana Frink gets hold of a copy of Grasshopper.  “She arrived at a section which described the fabulous television” – something that in the “real” America did not exist – “and it enthralled her, especially the part about the inexpensive little sets for backward people in Africa and Asia.”  We then see what she is reading in Grasshopper:

“Only Yankee know-how and the mass-production system – Detroit, Chicago, Cleveland, the magic names! – could have done the trick, sent that ceaseless and almost witlessly noble flood of one-dollar (the Chinese dollar, the trade dollar) television kits to every village and backwater of the Orient … Crouching before the screen [the villagers] saw words.  Instructions.  How to read, first.  Then the rest.  How to dig a deeper well.  Plough a deeper furrow.  How to purify their water, heal their sick.  Overhead, the American artificial moon wheeled, distributing the signal, carrying it everywhere … to all the waiting, avid masses of the East.”  Russia is brought to prosperity too, again under the Americans and the British, who divided the country between them.

Juliana reads an eloquent section on China under its great democratic leader, Chiang Kai-shek – no mention of Mao Zedong, who might as well not have existed.  “By 1950,” according to Grasshopper, “American technicians and engineers, teachers, doctors, agronomists, swarming like some new life form into each province” brought new life to the slumbering giant.  At last, under the Americans and, in India, Burma, Africa, and the Middle East, under the British, there was an end to “hunger, plague, war, ignorance”.  Meanwhile in the US itself, racial discrimination had been ended – “White and Negroes lived and worked and ate shoulder by shoulder, even in the Deep South.”

In Britain, an increasingly autocratic Churchill has been in power since 1940, ruling through the military might of the British Empire.  There are no other superpowers, and it is impossible that anyone can disturb the Anglo-Saxon hegemony.

Compared to the terrible triumph of communism, now largely consigned to the dustbin of history, to the near-triumph of the Nazi monsters, and to the dog that hasn’t yet barked in the night – the nuclear winter – most of us should count ourselves very fortunate to live when, where and how we do.

Let’s enjoy the sunshine and be as kind as possible to everyone, even our political foes – so long as they are not Nazis or communists. 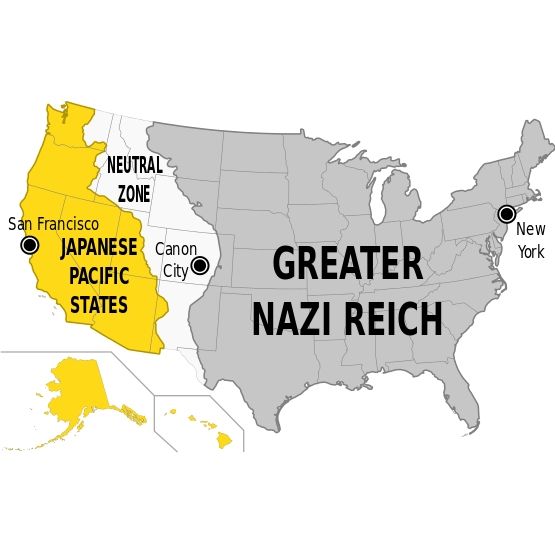