THE KOCH-SMITH VERSION Last time we peeked at the Jonah Goldberg version of Suicide of the West.  Now it’s time for the version of the same title published thirteen years ago by myself and Chris Smith, the former Labour Culture Minister and now the Master of Pembroke College, Cambridge.

What is striking is the similarity of message, though of course the words and reasoning are different.  Lord Smith and I made three simple points:

In the last two centuries, the West managed to create freedom from poverty, hunger, back-breaking labor, and from ignorance; freedom also from oppression by fellow humans – from anything which denies human dignity and equal treatment; and the positive freedom, to create one’s own life, making it better for oneself, one’s circle, and ideally society as a whole.

Second, the civilization resulted from a long, slow process, based ultimately on distinctive beliefs.  We excavated the beliefs which determined, and still determine, the characteristic distinguishing actions of Westerners.  We found six key beliefs and action patterns – six success factors - that determined the Western character:

The Christian heritage is individual responsibility and development, self-improvement based on love, and commitment to equality and compassion.

Optimism ruled the West increasingly until about 1900 based on belief in human autonomy, potential goodness, and the material and moral progress of humanity.

Science – the acquisition of reliable knowledge about the world – was based on the insight that the earth and the heavens are governed by a few universal, physical, mechanical and mathematical laws.  It was therefore possible to expect a continual expansion in useful knowledge and therefore everything could be investigated, predicted, managed, and improved by science.  This leap of faith was self-fulfilling.

Economic growth came late to the world and to the West.  Before 1400, China had come within a hair’s breadth of industrializing.  For reasons that are still obscure and controversial – but which probably had to do with an environment where inventors could be heard, and there was the freedom for ordinary people to grow rich by becoming entrepreneurs – Western Europe and soon after America led the industrial revolution.  Somehow after long centuries of no economic growth, it became automatic – and living standards kept going up and up, progressively banishing hunger, poverty, and untimely death.

All Western societies are organized by liberal principles and institutions in a way that almost no other societies are.  In the US, “liberal” means “left-wing”, and that is not the way we use the term. By liberal, Chris Smith and I mean a society which is not only fully democratic, but also where there is a spirit of freedom, fairness, and respect for all citizens.  Compared to other civilizations, liberal society is one which attaches greater importance to the sanctity of human life, the education of all its people, equality of opportunity, the freedom and development of the individual, and the elimination of prejudice against individuals and groups. Liberal societies are marked by freedom of religion and conscience, openness, widespread tolerance, the ability to collaborate, and the willingness of citizens to take responsibility for their actions.

If there is one defining quality of the West, which protagonists and antagonists agree is central to its character, it is individualism.  Even cultures permeated by Western ideas and business practices – such as Japan, Korea, and Singapore – are not individualistic in the Western way.  Montaigne (1533-92) said it all – “we owe some things to society; but the greater part to ourselves”.

Our third and final point is that we are at that treacherous, fascinating stage where the beliefs and actions underpinning a civilization are under attack, perhaps signaling a transition from one civilization to another.

Taking each of the underpinnings of Western society in turn:

We think the Christian legacy is secure.  The Christian heritage long ago burst the banks of organized religion.  It would be a brave Christian or atheist who asserted that there was much difference in personal responsibility, love and compassion between the typical Western Christian and non-believer.

We are less optimistic about optimism.  Our age seems to have great reasons for optimism, but little taste for it.

Science, we think, is okay.  The decentralization of society and access to knowledge was the twentieth century’s most profound and enduring trend.

Economic growth is secure.  It is not about to disappear.

We have more doubts about individualism.  Not that it is not prevalent, but that its ethical roots are scorched.

We have left liberalism to last, we said in 2006, “because it’s here that we detect the greatest vulnerability.  We have identified five self-inflicted reverses for Western liberalism – misdirected anti-terrorism, the resurgence of ‘liberal imperialism’, the fragmentation and devaluation of democratic politics, the moral emptiness of ultra-liberalism relativism, which says there is nothing special about Western liberal society after all, and incubates the ‘victim mentality’.”

What is most alarming is the structural nature of liberalism’s reverses.  Liberalism is challenged by the decentralization, fragmentation, and atomization sweeping the West.  For the first time, individuals, for the first time in history, do not comprise a class, a single elite, or an ‘establishment.’  They have no common family or social ties, no common ideology, and no common loyalty.  Unlike all their predecessors, they do not need these attributes to be successful.  And so, by and large, they do not have the values and networks that used to sustain liberal society.

Idealism is retreating.  It is not just that liberalism is so weak and vapid that it is easily violated.  The new realists, the cynics, the throng of ‘victims’, under-achievers, and the willfully uneducated, destroy not just liberal ideals, but all ideals.

Ultimately the West rests on one great idea and one set of actions, one that stands behind and unites the six great ideas of Western civilization.  The great idea, the common strand, is taking personal responsibility to improve oneself and the world.  This is now a distinctly minority taste, and the overall force of the media and culture of the West are killing rather than nurturing this idea.  The real danger today comes not from ordinary people but from opinion-setters, from ideas and attitudes invented and spread by those who ought to know better, from celebrities and popular icons, from a narrow and like-thinking (or not-thinking) elite predominant in the media, unscrupulous politicians, selfish corporate heads, and even people who think they are intellectuals, both ultra-liberal leftists and neo-conservatives.

Both the extreme left and the extreme right deny the value of self-discipline, the value of freedom of opportunity, and the value even of freedom itself. They do not reason or try to persuade; they demonize their opponents; they openly lie.  They are propagandists, not reasonable protagonists.  The extreme left and extreme right need each other and support each other mightily.  Their effect is horribly similar.  Both lead to the destruction of our civilization and both are helped along this path by the strength of the other.

Whether it is completed or not, the destiny of the West – springing from its unique ideas, and evident in what it has already substantially achieved – is to create a fully humane, free and rich civilization, by releasing the hopes, and more importantly, the potential and moral qualities, of all its people.  If the West does commit suicide, future generations may still wonder at the fragile glory of its golden age; and mourn the loss of a freedom which was priceless beyond compare.

In my next post, I will compare and contrast the Koch-Smith and the Goldberg views as written in our books, and update my own judgment on where we stand, and what, if anything, we can do about it.  I largely stand by what Chris Smith and I wrote in 2006, but I have some new reflections which I think are important, based on what has happened since then. 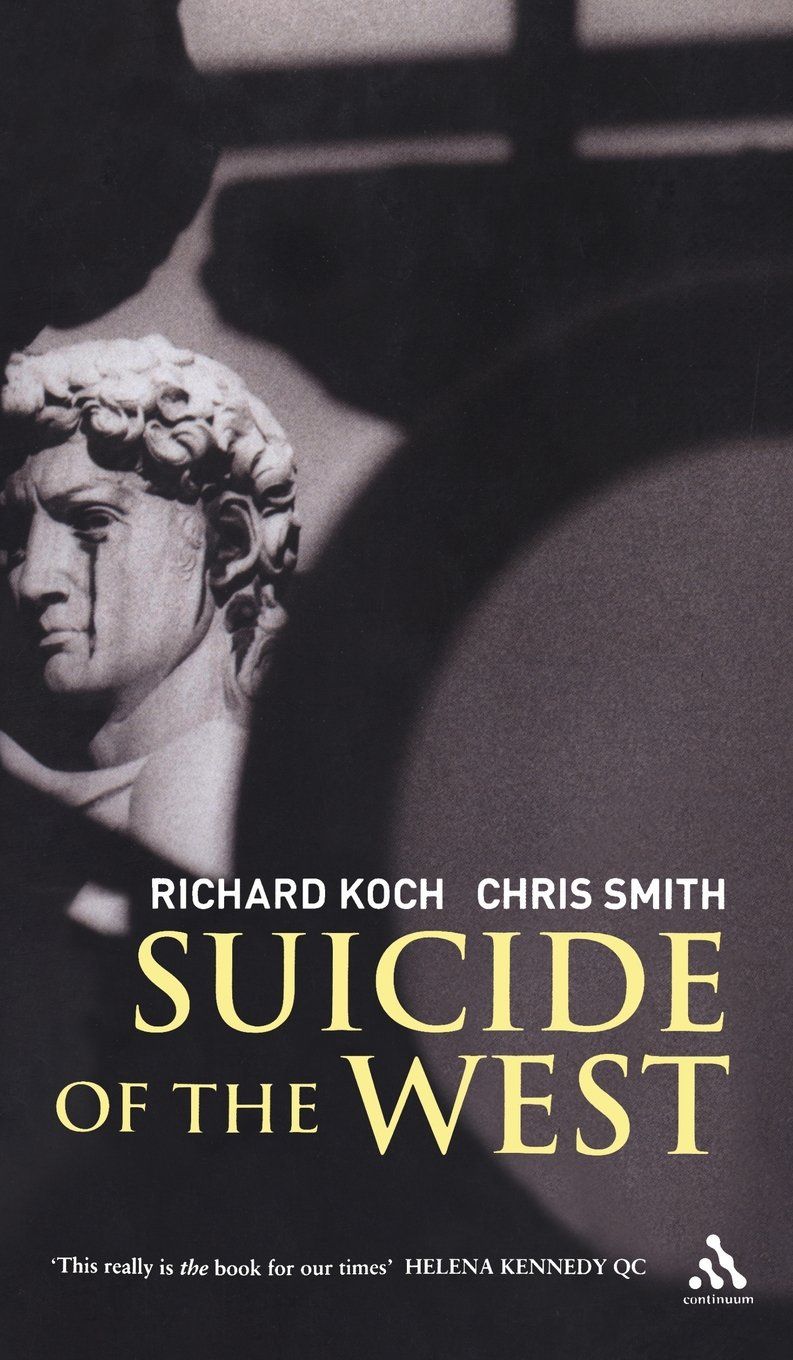