Do you know the main reason why most people are not good investors?
WHEN THE BOAT TAKES ON WATER, JUMP!

Do you know the main reason why most people are not good investors?  It’s because they don’t jump at the first sign of serious trouble.

In this post I’m going to introduce the Zurich axioms – a set of investment maxims which have tremendous power.  They were derived by a club of Swiss investors and traders on Wall Street after the Second World War.  There is a great book by Max Gunther – The Zurich Axioms – a slim volume with more valuable advice than I’ve ever seen in so few pages.  I hope you’ll read it.  To whet your appetite, I’m going to concentrate on the most important single axiom.

And at the end I will do more.  I’ll apply the same insight to business and life, something I don’t think anyone has yet done.

The greatest investment skill is knowing how to get out of a bad situation before it is apparent how bad it is.  In theory this is not hard – you enunciate the rule and stick to it.  The logic is clear – if something starts to go bad, it nearly always gets much, much worse before it gets better.  If it ever does.

So hard to do.

Why?  Because we are all inveterate optimists and we HATE to take a loss.  So we hope the trouble will blow over.  Anyway, it’s not very serious yet.

As Gunther says, “It takes courage and a kind of honesty with a cutting edge like a razor blade.”  Or as speculator Martin Schwartz said, “I’ll tell you how I became a winner.  I learned how to lose.”

At poker, the winners are not afraid to fold their cards.  The losers do so too late, or never.

When the ship starts to take on water, JUMP!

Not when it is sinking.  Rats desert the sinking ship. Owls fly away when the ship is getting a tad damp.

That’s it.  So simple.  So hard.  But next time, try it.  You may lose ten or twenty percent but you will live to fight another day.

When things go wrong, we hope too much.

Because we don’t cut our losses immediately, we suffer more.

Apply the JUMP Axiom to Life

Consider jobs.  It may be you who is sinking, not the firm.  I had that experience at the Boston Consulting Group in my twenties.  I was not cut out for the firm.  But I was stubborn.  Failure was unthinkable.  I’d never failed before.  So I doubled down.  Worked myself into the ground.  Ruined my romantic relationship and most of those with my friends.  Things just got worse.  I wasted four years doing that, and they were the most miserable of my life.

I should have jumped at the first sign of real trouble.

What about firing people?  There are very few people who enjoy doing this.  So we put it off.  I have had to fire perhaps thirty people in my life.  I always procrastinate.  In no single case did the potential victim come good, despite huge efforts from them and from me and others in the firm.  It is kinder and a better use of energy to fire them at once.  I wish BCG had done that to me.

How about trusting people?

It’s right to trust everyone at first and to be generally trusting.  Everyone should be trusted unless they prove otherwise.

Yet, what happens when you get the first real suspicion that they have behaved dishonestly?  You put it out of your mind.  You stick your head in the sand.  And in the end you get robbed blind.

Better to jump while you can and your losses are small.

And on and on.  Spending time with people?  If you stop really enjoying it, or never did, for Pete’s sake STOP NOW.

If you get bad vibes about a person, a firm, or an institution, cut your losses.  When I was seventeen and I applied to Cambridge University.  I went to Trinity College to talk to the history tutor who would, if I was admitted, be my teacher.  I disliked him and it was obvious the feeling was mutual.  I came back to school and discussed it with Mr Parker, my headmaster.

He shocked me by saying, “withdraw your application today.”

“You won’t get in.  You’ll waste your time.  Apply instead to Oxford.  Go to Wadham College, which is a friendly place.  You have the grades and the talent.  They may not admit you, but you stand a far better chance.  Nobody will know you flunked Cambridge.”

And nobody did, until I just told you.

Finally, what about relationships?

Here the 80/20 principle applies in spades.  There are a few relationships in our lives – including our romantic one – which matter hugely.  Here there cannot be any jumping.  If water is coming in, we must bail it out together, or swim away together.  With our life partner and our dearest friends, there must be unconditional commitment.  Such relationships cannot work otherwise.  They are the great exception to the JUMP rule.

Yet the large majority of our relationships can also benefit from the rule.

If a relationship – with a colleague, or someone we meet through friends, say – starts well, but then begins to deteriorate, what do most of us do?

We ignore the problem and hope things will sort themselves out.

Nine times out of ten, they don’t.  Instead they get steadily worse.

If the waters accumulate, for your sake and that of your friend, there is only one sensible thing to do.

When the ship starts to take on water, don’t hope, don’t pray, and don’t vacillate.

Close your eyes and JUMP!

Every few weeks I will discuss a different Zurich axiom, only the ones I think most interesting and useful.  In some cases, I don’t agree with the axiom, or not quite; but those are the ones worth thinking about the most.  In all cases, I will relate them to life and careers as well as investment. 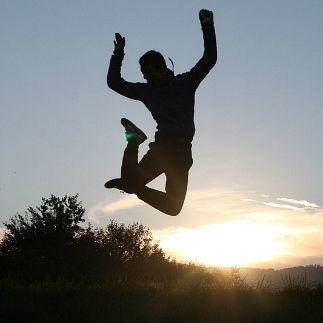