Whether we realize it or not, we all impose a narrative on our lives.
REWRITING THE NARRATIVE OF YOUR LIFE

“We tell ourselves stories in order to live … We live entirely by the imposition of a narrative upon disparate images, by the “ideas” which we have learned to freeze the shifting phantasmagoria which is our actual experience.”

I was struck this week by this quote from Joan Didion’s book The White Album.  Whether we realize it or not, we all impose a narrative on our lives.  But I want to relate this thought to the one which I explored in my previous blog – Walt Whitman’s “Do I contradict myself?  Very well, I contradict myself.  (I am large, I contain multitudes).”  We are very different in different contexts – as a son or daughter, a lover, a friend, a boss or an employee, a football player, and so on.  Last time I focussed on three points – how we are different with different people, in different organizations, and depending on the place we live.  The punch line was obvious yet rarely followed – spend our time with the people, in the job, and in the town that give us pleasure and where we feel useful.

This time I want to apply the same framework to the story of our lives.  We habitually think of ourselves in particular ways, and we invent a story, as Joan Didion says, which edits and invariably distorts the true narrative of our lives, which indeed “contains multitudes”.  For example, if I met you for the first time, perhaps on a date, I might ask, “What sort of person are you?”  You would reel off a list of adjectives or descriptions, and if you liked me, you would probably skew them towards attributes you thought I found attractive. But if I was interviewing you for a job, your list of qualities would probably be quite different.

Imagine you are alone, thinking quietly about yourself and your life.  You ask yourself the same question, “What sort of person am I?”  The list of attributes will probably be different again.  And if you repeated the process a month later, you might come up with a significantly different list, depending on your mood, whether someone had recently complimented you, and the kind of day you’d just had at work.

So let’s play this little game.  Make a list of your most salient characteristics and activities.   For example, My list might include “impatient, demanding, impulsive, affectionate, bloody-minded, independent, intellectual, investor, writer, speaker”.  Write a long list, about twenty different attributes or important aspects of your life.  Then pop each of these attributes into the framework below, according to which box it most neatly falls into:

Now set your “box” with the words written in to one side.

Here’s a subversive thought for you – you don’t have to be the person you think you are.  Or to put it two other ways – you are allowed to change the narrative of your life.  Imagine the person you would like to be and start acting as if you were that person.

So take the attributes that are in Box A and imagine that these are the central and predominant attributes that you have.  Even more revolutionary, write into Box A new attributes that fit that box – that are attractive to you and useful to yourself and other people – that you want to have, and could (just about) imagine having.

Then pretend you have those attributes, or try out having them.

In his marvellous book Strangers to Ourselves, Timothy Wilson tells the rather touching story of Marcia Muller, an unemployed and timid woman who wanted to change herself – and become an author.  So she invented a fictional heroine who was quite different from herself.   She called her Sharon McCone and fashioned her thus: “She was taller, thinner and braver than I.  She commanded an amazing variety of skills – marksmanship, judo, bread making, automotive repair – while I could barely type.  She would go anywhere, safe or dangerous, and ask anyone questions, while I had been known to become nervous when dialing the phone for the correct time.”

Muller modelled herself on her creation – “I didn’t grow taller, but I did lose weight and become braver … I was definitely more confident. During research for subsequent novels, I would learn to walks into places safe or dangerous and ask anyone questions.”

This is not an isolated case.  The detective thriller writer Sue Grafton crafted a similar experience.  She started as a hospital receptionist who hated her job.  So she conjured up private investigator Kinsey Milhone, a brassy, dominant, profane private investigator – and started to assume aspects of her character.

Aristotle said that we acquire virtues “by first having put them into action”; “we become just by the practice of just actions.”  It might not come naturally, but do it anyway, and you can become what you want to become – in the mantra of Alcoholics Anonymous, “fake it till you make it”.  Now we have the blessing of psychology to confirm such advice.  As Timothy Wilson says, “one of the most enduring lessons of social psychology is that behaviour change often precedes changes in attitudes and feelings”.

This fits in with Walt Whitman’s view that we are large; we contain multitudes.  There is an almost infinite number of narratives we could construct about ourselves.  Because there is no real truth about who we are inherently, we can construct the truth we want.  The act of defining our future self can become self-fulfilling.  The way this seems to operate is through our unconscious mind finding every opportunity to put such opportunities in our path, and encouraging us to make our actions congruent with our rather starry-eyed view of who we are.

This makes the definition of our desirable self and our future narrative acts of enormous importance.  There is just one final thing to say.  The unconscious mind will not create a characteristic, or realize a goal, unless we believe that it is possible to have the attribute or reach the goal.  It is no use a grown woman who is short of stature aspiring to be six foot six, and it is futile for me to think that I can become a Wimbledon champion.  There are some limits to what we can believe and make happen.  Yet there is an enormous range of outcomes that can be believed and attained, and we might as well reach for the highest level within that range. 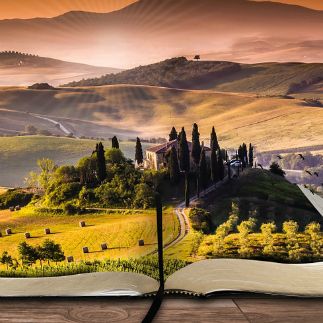