The Organization Man Thesis
THE RISE & FALL OF ORGANIZATION MAN

One of the surprise bestsellers of 1956 – frequently reprinted throughout the 1960s – was an epoch-defining book by William H. Whyte called simply The Organization Man.  Those were the blessed days when books didn’t have to have subtitles to tell you what they were about.  One of my odd habits is re-reading important books of social commentary from the past.  The habit often reveals how hard it is to read social trends, and yet throws a lot of light on what has happened to define our own times.

It is about the growth of what today we call managers, but more particularly about how they are happily subservient to the large organizations they serve.  The Organization Men, Whyte says,

… are keenly aware of how much more deeply beholden they are to organization than were their elders.  They are wry about it, to be sure: they talk of the ‘treadmill’, the ‘rat race’, of the inability to control one’s direction. But they have no great sense of plight; between themselves and organization they believe they see an ultimate harmony and … they are building an ideology that will vouchsafe this trust.

It is this ideology that Whyte writes about.  He sees the decline of the Protestant Ethic, “the pursuit of individual salvation through hard work, thrift, and competitive struggle.”  Replacing that ideology, Whyte detects the emergence of a Social Ethic:

With reason it could be called an organization ethic, or a bureaucratic ethic: more than anything else it rationalizes the organization’s demands for fealty and gives those who offer it wholeheartedly a sense of dedication in doing so.

When a young man says that to make a living these days you must do what somebody else wants you to do, he states it not only as a fact of life that must be accepted but as an inherently good proposition.

Teamwork and identification with the organization – with its purpose and its own social mores – are therefore, Whyte argues, replacing the rugged individualism that made America what it was:

The ‘professionalization’ of the manager, for example, and the drive for a more practical education are part of the same phenomenon; just as the student now feels technique more vital than content, so the trainee believes managing an end in itself, an expertise relatively independent of the content of what is being managed.

In other words, the ideology of the general manager, who can move from industry to industry and manage pet-food as well as steel or oil, without having to be an expert in any particular field except managing.  This ideology facilitated the growth in the 1970s and 1980s of the huge organizational conglomerate, spreading its tentacles into many different products and industries.

But Whyte is not really interested in the economic consequences of Organization Man.  He pinpoints its social consequences, which he sees as pernicious:

In particular, Whyte regards the intrusion of psychologists into the workplace as wicked – an attempt to mold individuals into the template of the firm, denying their individuality so that they can serve the Organization.  At the back of his book is an Appendix titled How to Cheat on Personality Tests.

The book’s conclusion is magnificently uncompromising, a call to arms on behalf of the individual:

He must fight The Organization. Not stupidly, or selfishly, for the defects of individual self-regard are no more to be venerated than the defects of cooperation. But fight he must, for the demands for his surrender are constant and powerful … It is wretched, dispiriting advice to hold before him the dream that ideally there need be no conflict between him and society.  There always is; there always must be.  Ideology cannot wish it away; the peace of mind offered by organization remains a surrender, and no less so for being offered in benevolence.  That is the problem.

It should hardly need saying that what follows is my own interpretation of trends from 1956 to 2017 – but in the spirit of individualism I urge you to critique and if necessary refute my own critique:

Peter Drucker once remarked that no social theory was disproved so quickly as that of Organization Man.  Far from ushering in an age of docile conformity, the 1960s and beyond saw an explosion of colourful individuality, albeit often incubated within group subcultures such as New Age religion, and feminist and gay movements.  But these were voluntary networks and not benevolent organizations paying their troops for conformity.  Rock music did more to untie young people from their stifling suburban roots than any revival of old-style Protestant Ethic ideology.   Across huge swathes of society, throughout the free world, we saw the death of deference.  I imagine Whyte would have cheered this on, but it is not what he predicted.

It was certainly not a revolt of the Organization Men (or women – a group that Whyte, like virtually all his contemporaries, did not see coming).   The Cultural Revolution came from their sons – and daughters.  The most effective exponents of individualism since the 1950s have been actors such as James Dean, rock stars such as Dylan, Lennon, Queen, unorthodox writers such as Philip Roth and Gore Vidal, as well as business creators such as Bill Gates and Steve Jobs.

As a percentage of American business value, and employment, the largest corporations as measured by number of employees, have been in decline since the 1970s.

It is small, entrepreneurial businesses, funded initially by venture capital and private equity rather than the stock market or big business, that have been the big success story, one that continues to amaze.

The speed with which new and recent companies such as Amazon, eBay, Google, Facebook, and Uber have grown in value and social influence is astounding and unprecedented.

All these companies are either network businesses or they have networks nestled within them.  Their customers generously do the heavy lifting which drives the effortless explosion of these firms.  They are most valuable – to their customers as well as their owners – when they are bigger networks.  Since 2000, new platforms such as the iPhone have created wealth on a scale that is mind-boggling and without historical precedent, because the iPhone is an intermediary between customers and app developers – everyone benefits from a larger network.

Corporations which were the epitome of Organization Man such as IBM, Xerox, American Steel and Sears Roebuck are a shadow of their formers selves, outwitted by the creativity of new entrepreneurs and their ability to create new technology and products that customers want.  The inward-looking rich corporation is well and truly dead.  It can offer neither a sense of belonging nor lifetime employment; the days of munificent benevolence are well over.

Whyte was right to pinpoint the long, slow retreat of the Protestant Ethic.  But he was largely wrong about why it was on the slide.  It wasn’t so much competition from the Social Ethic, as the change in social values and the increasing inability of parents to pass on or impose the ethic of deferred gratification to their children.

And in one particular sphere, the Protestant Ethic has proved remarkably resilient – that of business, and especially American business.  I know this because I have long been preaching the gospel of liberation, allied to the 80/20 principle, which says that most great results come from few causes.  If you are creative – and we can all be creative – a small proportion of your time and toil can generate astounding results.  It’s a matter of identifying the area we can be most effective in, and the best way to achieve dramatic results.

Therefore – the 80/20 principle can set you free. You can work less.  At the same time, you can earn and enjoy more.  The only price is that you need to do some serious 80/20 Thinking.  This will yield a few insights to take your life to a totally new level.

Pursue the career you really want, the one that excites you most.  Pursue activities at work and outside that delight you most.

Hard work and self-denial are not the route to riches.  And yet it is still routine for successful business folk to attribute their success to hard work, dedication, perseverance, and other traditional virtues.  Millions of Americans work very hard and do not become successful, but the facts can never stand in the way of something as entrenched as the religion of hard work.

Nor is Organization Man (and Woman) really dead.  Thirty-four years ago I co-founded a consulting firm which has become very large and successful.  I checked out after six great years and have enjoyed a full and varied life, and the less I worked, the more money I made.

Occasionally I meet former colleagues who are still on the consulting treadmill, which is lucrative but exhausting.  Almost invariably, they are a bit jaded and careworn; most of them are only doing it for the money or because they can’t think of anything else to do.  They will say they enjoy the work and being with ultra-bright co-workers, and there is some truth in that, but they protest too much.

Of the people who were at the firm in the early days, the ones who have achieved the most left and went into venture capital or another field altogether.  But many people still dedicate their life to The Organization.  It is not a good idea.

Whyte was supremely intelligent and insightful, and he wrote like an angel.  It is a pleasure to re-read his book, even though it is largely wrong.  It is not his fault.  It is just that future trends emerge in unexpected or perverse forms.  We just can’t know the future.  It should make us humble.  My only prediction for society in 2050 – or even 2030 – is that it will be significantly different from today, in ways nobody is anticipating.

In identifying the threat to individual freedom, Whyte was off-base; but in defending the right and the struggle of the individual, and by insisting that society must serve the individual and not the other way round, Whyte was standing up for all that is noblest in the Western tradition.  Even if The Organization Man was not as prescient as many expected, it still deserves a prominent pedestal in the Great Hall of Freedom.  Threats to our freedom abound, and every genuine ‘freedom fighter’ in every generation is to be eternally celebrated. 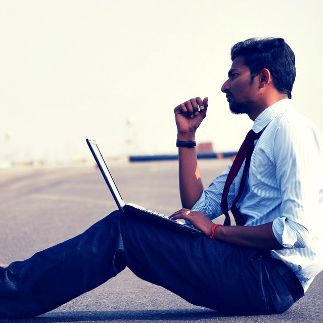