It’s official! Through the miracle of Twitter, I have just discovered...
WALK TO THINK, TO DEEPEN FRIENDSHIPS, & TO MAKE MONEY!

It’s official!  Through the miracle of Twitter, I have just discovered an article by Ferris Jabr (see end of this post) which gives scientific evidence that walking helps us think.  Walking stimulates the heart, sending more blood and oxygen to the brain, connecting brain cells, improves memory, and stimulates the growth of new neurons and of messages between the neurons.  Experiments on 176 Stanford students showed they scored substantially more on creative tasks when they walked than when they sat. Meanwhile a study at the University of South Carolina showed that students did better on a memory test after walking through an arboretum than others who walked along city streets.

Apparently some Greek philosophers spent most of their days moving from place to place and found that walking encouraged thinking and writing.  Henry David Thoreau said “the moment my legs begin to move, my thoughts begin to flow”, while it has been calculated that William Wordsworth walked 180,000 miles in his life – an average of six and a half miles a day.

I’m not surprised by this, as I have long used walks to arouse my jaded grey cells and create new thoughts and ideas.  Let me add my own anecdotal evidence to the swelling mound of scientific data about the virtues of walking.

I’m from London but I’m lucky to live in Southern Europe for most of the year.  Often, instead of visiting friends in the UK, I invite them to stay with me where it’s sunny for a few days, and one of our main recreations is always walking.  I have a series of local walks – up and down hills, along rivers, on the beach and by the sea, and in national parks – one great choice is “the railway walk” in Spain, in a national park above a river and a single-track railway line, dipping down into the river for the dog to swim in; followed by an excellent lunch in the sun on the railway station, with a friendly waiter in attendance.  If we are feeling more expansive, we can have a gourmet lunch at the local hotel, sitting outside overlooking the water mill.

Walks are terrific because they are genuinely social and also good exercise – there is almost no other form of exercise where the body and mind can benefit and you can also think creatively and socially.  You can walk with one friend or a dozen – people can walk in twos or threes and swap positions to talk to everyone, and it all happens naturally.  Because the routes are chosen and easy to follow, our minds are free to roam, stimulated by the activity of walking and the beauty around us.  Walks are made for exchanging news and confidences, for really getting to the bottom of what you and your friends are thinking and feeling – something that is surprisingly hard to do when sitting down or facing distractions at home or in a coffee shop. Instead, with a few rucksacks and a little planning you can have a superb picnic in a charming spot at very little expense.  My only complaint is that you can really only have one lunch a day, though you can have a “tea picnic” in the early evening, and, I suppose, a “breakfast picnic”, though I have never done the latter.

Most of my business interests are still based in the UK, although there is now one very important one in both Germany and France.  In all cases, instead of visiting the companies very often in situ, I often invite their leaders to see me in the sun.  The main attraction, though, is the ability to walk and talk about the company and its performance and potential.

I have some strict ground rules – no spreadsheets, presentations, or papers at all are allowed on the walks.  Nor are mobile phones.  Everything has to be done from memory, though some questions may require a check or confirmation after the walk.  What I try to understand in depth is the segmentation of the customers and competitors, and how it might be changing or made to change.  I want to know the product and service segmentation, too, and to understand what is the true profitability and cash flow of each segment.

This can be testing for those being interrogated, but it is done in a collaborative and friendly way – we are all on the same side – and with the intention to create a better strategy and future for the firm.  For me, that has to be based around dominating particular market segments and also, where at all possible, exploiting and building network effects – that is, positioning the firm so that customers and suppliers have a vested interest in being part of a bigger and bigger network, as for example with Facebook or Betfair.

It is not unusual for a totally new idea – for instance, for a new product or service, for how to deepen network effects, or for a lower-cost way of doing something – to surface on one of these walks.   They are a great way for me to find out and probe what is really happening and to think imaginatively about how the business can be made more profitable.

Next time you are invited to a business meeting, suggest a walk instead.  You will be amazed at how much you can learn and contribute.  I can’t think well in the office, and neither can the most creative people I know.  Get out in the fresh air, and exercise body and mind together.

It may be fanciful, but in the future, instead of tower blocks and business “parks”, wouldn’t it be good to have a set of companies based in real parkland, with forests, rivers, lakes and hills, where the real thinking takes place in beautiful surroundings?  Why not?  Wouldn’t creative people be drawn to such places – as already happens to a degree with college campuses, Silicon Valley, and the campus-like environment of Apple and some other rich firms?  Why not go the whole hog, and set up a network of firms – not direct competitors, but those in adjacent fields, quite literally?  Perhaps it will never happen, but if it did, it could transform the quality of life for millions, and lead to even greater prosperity.

Anyway, I am already doing my little bit to advance a healthier, greener, and more creative way of doing business and accumulating wealth.  Why don’t you join me?

You might also want to check out the original article by Ferris Jabr, which is here: http://www.newyorker.com/tech/elements/walking-helps-us-think 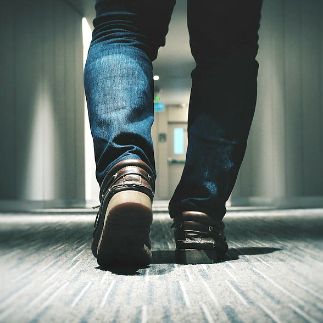